After Andy Simmons let me try out his second prototype White Xtra sail on the Fal Estuary in Cornwall (see pages 11 and 12 in Perihelion 122), he kindly loaned me the sail for the rest of the season.  In return, I offered to write a short article on my experience with the sail for the next issue of Perihelion. 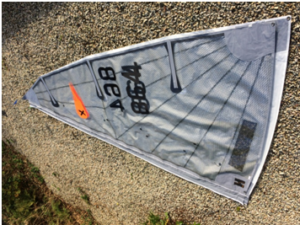 Rigging the White Xtra sail is exactly the same as the Mylar Xtra sail.  However, because of the closer 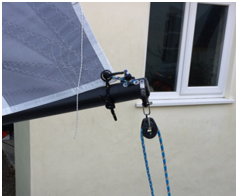 proximity of the clew of the White Xtra sail to the end of the Xtra boom, it is advisable to dispense with the block and spring clip, and thread the outhaul, shock cord and tie-down directly through the eye at the clew of the sail (Figure 2).  Alternatively, the White Xtra sail can be rigged on the Standard sail’s boom thereby allowing the clew outhaul to be used with a block and spring clip.   The top mast is now available with the halyard block secured to a bracket riveted to the mast head and extending upwards at an angle thereby allowing the head of the sail to be hoisted about 4 cm higher than with the halliard block secured to the eye at the mast head, as shown by a comparison of Figure 3 with Figure 4.  Because the luff of the White Xtra sail is about 5.5 cm longer than that of the 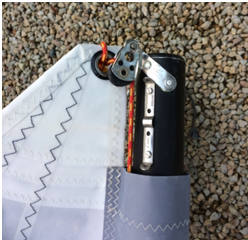 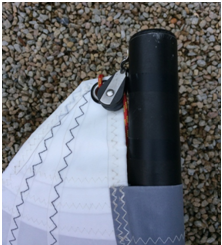 I used the second prototype White Xtra sail at the Association Championships held at Attenborough (Figure 5), and at the Open Meetings held at Littleton (Figure 6) and Merthyr Tydfil (Figure 7).  When analysing my results at these events, I think it is only fair to consider the following factors:- 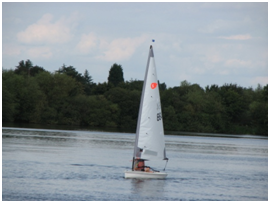 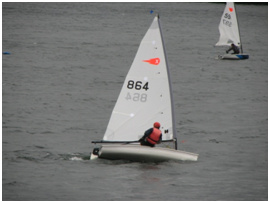 Two Open Meetings and one Championship hardly provide a rigorous evaluation of the sail’s performance, but they have given me a chance to try the sail out in conditions which varied from light and very testing (Association Championships) to gusts reported to be as high as 35mph (race 4 at Littleton).  In the very strong winds, the sail had all the same benefits of balance, controllability and easier boat handling as provided by the Mylar Xtra sail.  In the very light conditions over both days of the Championships, I found the luff of the sail difficult to “read” on the beat, but I then found it a lot easier and the sail seemed to have more “power” when I slackened the foot right off (see Figure 5).  The slightly greater depth cut into the luff of the production version of the sail may help to address this point.  In any case this may be more a reflection of my own inherent difficulty (or should that be cack-handedness?) in very light conditions – Paul Hinde borrowed my boat and the White Xtra sail for the last race at the Merthyr Tydfil Open Meeting when the wind had dropped to very light, and at one stage, he was in 2nd place!

An acid question to consider is how the White Xtra sail compared to the Mylar sail.  Henry Jaggers and John Sturgeon used their Mylar Xtra sail at the Littleton Open where in race 1, I finished in front of both of them; in race 2, I finished behind both of them (I was over the line at the start and it was the lightest wind of the day – well, I have to have some sort of an excuse!!); and in race 3, I finished in front of both of them.  I also raced against them in race 2 at Merthyr Tydfil when they were using their Mylar Xtra sail, and I finished between them.  Hardly enough data to draw any firm conclusions, but perhaps the least you can say is that it was as quick as the Mylar sail in wind strengths which varied from “light” to “fresh”!

In theory, the more supple white Dacron cloth and the slightly greater sail area should mean that the White Xtra sail is competitive against the Standard sail over a wider range of wind speeds than the Mylar sail.  If so, it should help to address the concerns I raised in the Spring 2015 issue of Perihelion (no. 114, p22-23) about not being able to change rigs during a one-day event or even between days at a Championship.  In my opinion, the White Xtra sail satisfies the aim of giving a fully rigged Comet a more modern look.  I have enjoyed the novel experience for me of trying out a brand new sail design (thank you Andy!), and I have been sufficiently impressed by its potential to buy a production version of the sail.  I look forward to the time when one of the active “top” sailors in the fleet decides to compete right through a season with a White Xtra sail, thereby giving it a more extensive and objective evaluation than I have been able to in the last couple of months of the 2017 season.

Figure 1.  My Mylar Xtra sail placed over the White Xtra sail and the two sails aligned at the head and along the luff.

Figure 2.  The clew of the White Xtra sail attached directly to the outhaul, shock cord and tie-down with the foot of the sail not quite at full tension showing the proximity of the clew to the end of the Xtra boom.

Figure 4.  The position of the head of the White Xtra sail in relation to the head of the top mast when the halyard runs through a block secured to the eye at the mast head.

Figure 6.  In a very much stronger wind at the Littleton SC Open Meeting (race 4 – the bent burgee was the result of a full inversion capsize in the previous race!).

Figure 7.  A comparison with John Sturgeon’s Mylar Xtra sail at the Merthyr Tydfil SC Open Meeting (have I got the foot too loose on a beat at that wind strength?).